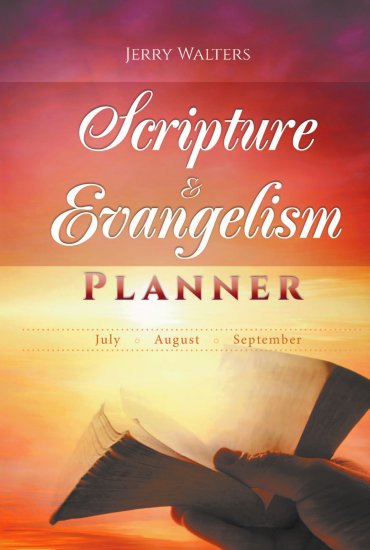 ‘Scripture & Evangelism Planner’ is a method that I have found helpful for reading through the Bible every year. The morning and evening offerings follow the pattern of the six days of creation and the morning and evening offerings at the Tabernacle and later the Temple in Jerusalem where our Lord Jesus worshipped. The purpose of my writings is to make the Bible understood and appreciated by readers of all ages who perhaps have never studied the Bible before, or for Christians who want to go deeper into the Word of God on a basic level.

This book, ‘Scripture & Evangelism Planner,’ has been at least fifty years in the making. Suffering from asthma and bouts of pneumonia as a young boy, it was sometimes difficult to sleep and I missed quite a bit of school at times. But I was an avid reader and I studied the Bible at a young age. About fifty years ago I nearly lost my life, but the Lord spared me and the medicine for my condition was rapidly improving at that time. The study of God’s Word has always been a part of my life. As my health slowly improved, I became a Sunday school teacher and taught children for much of my life, as well as serving in many areas of ministry and Church life. My work background is raising flowering bare root perennials at my family nursery in Holland, Michigan. I had been married for more than twenty-five years and had three sons before experiencing the tragedy of divorce. Yet again the Lord was merciful and I became involved in a Korean Church plant. Through the pastor of the Korean church, I went on two study tours in South Korea in 2013 and through him I was introduced to a dynamic Christian woman named Woonja Back. She was the first member of her family to accept Jesus into her life. Sharing the same love of Scripture and Evangelism, we were married on February 2, 2014 in Holland, Michigan and also had a wedding ceremony at her church in Incheon. However, the immigration process took two years to complete so that she could reside in the US, so I spent as much time in Korea as possible. During my visits and ministry in Korea, I witnessed a number of people in Korea accept Jesus into their hearts, even though I don’t speak Korean beyond a few words and phrases. Convinced that the Word of God brings salvation, I began writing a series of four books on January 1, 2017 and I have been posting my daily morning and evening lessons on Facebook. My prayer is that anyone who picks up this book or reads my lessons online will experience the same mercy that the Lord has shown to me.