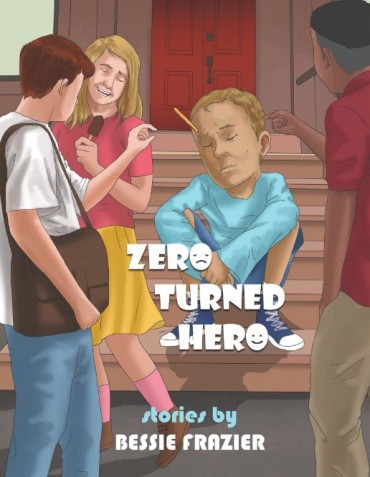 Zero Turned Hero will take readers from fantasy to reality. Many of us are faced with bullies in our experiences. Some of us may use bully tactics at times, and we know this is wrong. Sometimes incidents in our lives turn us into people we were not meant to be.

“Tip Top Finds Hope” will open the door to what he felt when kids made fun of him.

Victor has to accept the consequence of being deceitful and not telling the truth in “Victor Learns a Lesson.”

What has been your greatest fear? Did you ever get over it? Read “Nightmares” to learn how Joseph overcame his fear.

A twelve year old girl, had years of pain and grief for doing something for a loved one. Do you agree with the mother or the daughter in “The Onion?” In “The Lavender Dress” readers will find out how a person… can go from being poor…to well off, and yet not be happy.

Jennifer has a hard decision to make in Jennifer’s Luck. Would you have made the same choice?

Will has to challenge three bullies in “The End of an Era.” What do you think helped prepare him for the day of his victory?

Evil may bring out evil. What causes “The Stone King” to become ruthless?

Zero Turned Hero will challenge minds and imaginations. At times it may seem like an emotional roller coaster ride. Stories can provoke sensitivity, empathy, or remorse. This book has strong messages and critical thinking skills that can lead to great discussions.

Bessie Frazier was born in Brooklyn, New York. She received her B.A. degree from Fisk University in Nashville, Tennessee and her M.A. degree from Montclair State College in New Jersey.While at Fisk, she became a member of the Fisk Writer’s Workshop, under the well known author John Oliver Killens.

She majored in English and Sociology at Fisk University but received her degree in Sociology. She received her Masters Degree in Education from Montclair State College in Upper Montclair New Jersey, and completed Post Graduate work at Brooklyn College and New York University. She taught English for over 30 years in Brooklyn NY and New Jersey Middle Schools.

She is the author of poems, stories, plays, and positive raps. She has performed for schools, colleges, churches and special interest groups. Her work has appeared in anthologies, magazines
and other sources, as well as being featured in Who’s who in the East. Students have performed her work in schools, and she has received countless letters of praise from electrified readers.