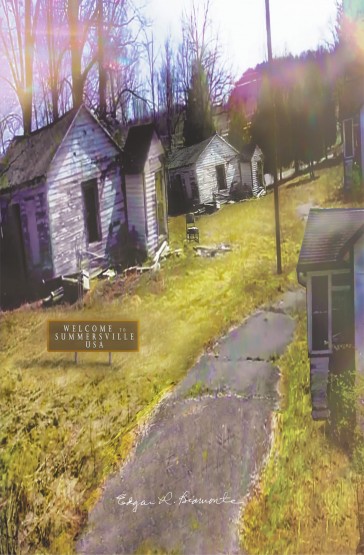 Welcome to Summersville is a humorous, satirical novel.
Sal D’ Angelo hopes to give his son, Randy, $1,500 to start college in 1972, but
is broke. Though Sal lacks restaurant experience, Pearl persuades him and his
family to run her luncheonette at her Catskill bungalow colony, claiming they’ll
profit $5,000.
The soda counter and vital kitchen equipment is old and unworkable, he
soon discovers. There’s no air conditioning or acoustical ceiling tiles to absorb
the deafening noise. Playing pinball, campers push, fight and shout. They curse
when they tilt the machine or when balls land in traps and they try to rewire
the machines to get free games. Sal’s wife touches a girl while leading her out
for screaming hysterically at a misbehaving ball, and her father threatens to sue.
Lounging, teens are reluctant to remove their feet from tables containing salt
and sugar they pile and squirt with ketchup. Two male dogs knock over chairs
while tearing after a female poodle in heat. Waiting on line for their orders, parents
push one another, demand better service, and curse the family for running out
of spaghetti.
Girls scream when the campers flap a dead snake on the counter. So do their
moms playing mahjong outside after receiving the same gift. A bully ties up the
D’ Angelos’ youngest son inside a dilapidated bungalow.
Before Sal leaves, Pearl falsely accuses him of taking home most of his stock
instead of leaving it for her. Consequently, she persuades Bernie, renter of the
machines, to give her Sal’s share after adjusting them to provide extra free games.
More curious about the obvious record take than angry, exhausted, Sal drives
home instead of calling the police.