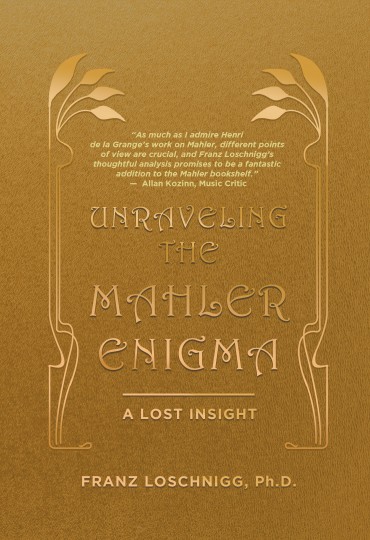 Intended for lovers of the arts, this “big think” book engages the dynamic of culture and the creative mind. It unravels, layer by layer, misconceptions about Gustav Mahler.

Early in the 1970s Franz Loschnigg realized that a myth was developing around Mahler based on the assumptions of Henri de la Grange. Rather than accepting this work as definitive, the author turned to unique sources the contemporary writers and poets of fin de siècle Vienna and the mid-20th century sciences of cultural anthropology and social psychology, as well as the author’s own familiarity with Vienna. With a synthesis of disciplines, he revealed the illusions of an established narrative around Mahler, upon which decades of research are based.

Something like a work of investigative reporting, this is an inquiry into the dynamic of artist and culture: Mahler embedded in his culture, deconstructing notions of his childhood, with marvelous stories of ordinary life in imperial Vienna, a surprising critique of the Conservatory’s composition training, and his subsequent breaking free to become a singular creative mind.

Born in 1929 into Old Austria, fluent in six languages, broadly educated in the European humanist tradition, and with a background of vast cross-disciplinary reading, this was an author whose understanding opened to deeper issues of mind and spirit. No ordinary thinker, Franz Loschnigg pursued the crux of the Mahler mystery.

Franz Loschnigg was a graduate first of the Hochschule für Musik und Darstellende Kunst in 1966 and then in music history and theory at the University of Wisconsin School of Music in 1976. Here he encountered the Mahler myth, and his curiosity compelled further inquiry.

Always conscious of the larger picture, this independent scholar did advanced study in fields as diverse as the phenomenology of music, cultural history, physics, literature and mythology, and the newer sciences of social psychology and cultural anthropology. Unraveling the Mahler Enigma was the first of a planned four-volume study of Mahler within the culture and myth of Western music. When he saw the direction and weight of conventional Mahler research however, he decided not to struggle against it. His research and writing continued until his death in 2011.