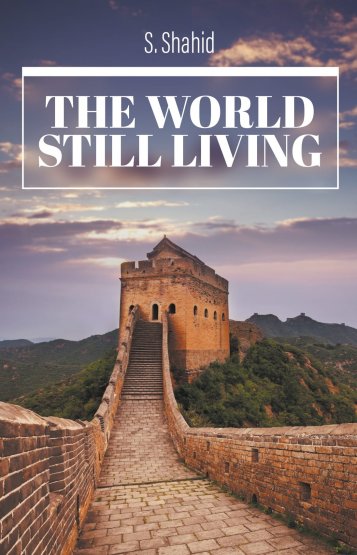 About the book
THE WORLD STILL LIVING Is my third venture in English literature, My mother language is Bengali and I have no
proficiency in English language yet I have composed my verses in English to spread out my ideas around the world
for those who believe in human progress.
I am grateful to our National dailies and magazines for their news and information on the basis of which I have
composed some of my verses.
I believe any language can be benefited by other languages by taking and giving process in style, technique and idea.
Language moves like the course of the river quite independently to flourish itself from internal and external resources.
When we deal with our national matters we cannot ignore international affairs which are interlinked with our
interests. So the need for learning international language comes.
However, in composing the verses I have tried to follow the style of old Bengali poems in order to introduce a new
flavour in English poetrical system.
I remember with gratitude a few personalities like Dr. Sheikh Maqsood Ali, Poet Abdus Sattar, Poet Mozaffar
Hossain, Poet Kazi Salahuddin, Poet Nurul Huqe, writer Nilufar Begum and members of the Authors Association
(Bangladesh Lekhak Samiti) of Bangladesh who encouraged me in my literary persuits.
I am also grateful to Mr. S.M. Al-Hossainy and Mr. Salahuddin Ahmed, the Hony, Chairman and the Hony, Secretary
General of Swanirvar Bangladesh who were kind enough to give me a chance to serve their organisation meant for
the backward people of Bangladesh.
I am grateful to Mr. Sufi Md. Seraj-ul-Islam who has undertaken the task of printing this volume. The sale proceeds
of this book shall be spent for better studies of the children of the Dream Land Preparatory School which he founded
in 1984,
Earlier Mr. Seraj-ul Islam published my book ‘The Verses on Islam’, I believe ‘The Verses on Islam’ will succeed in
achieving its objective.
I am thankful to Mr. Antique Huge Choudhury, a famous dramatist and T. V. personality of Bangladesh, Mr. Kazi
Zahurul Huge and Mr. Atahar Khan two Journalists of repute who tried to expose me in my initial stage.
Lastly, I express my thanks to Poet maul Haque, Mr. Forhad khan, Mr. Abdul Mannan Bakery, Mr. Abdul Awaal,
Babul, Mr. S. Shahidullah, Mr. Shamsul Alam, Mr. Abdul Hye, writer Mr. Ahmed Kafil and many others for their
Constant inspirations.

About the author
The full name of S, Shahid is Syed Shahiduddin Ahmed His father late Syed Shamsuddin Ahmed was a Civil Servant
in British India and his mother tato Azizannesa was a noble lady. His father came of on old Syed family at Andikote
in the district of Comilla, Bangladesh and settled in Tangail district. S. Shahid was born in 1923 at a village named
Mirer Betka near Tangail town.
He obtained M.A, degree in Bengali from Dhaka University and studied Public Administration of the American
University of Beirut, Lebanon. He served in the National Institute of Public Administration, NIPA, Dhaka (Now
known as PATC, located at Savar near Dhaka) as Instructor.
He retired from that service in 1982. His book of verses The Mad Thoughts was reprinted by the Scholars of PCI of the
United States of America and distributed by them around the world which made S. Shahid famous overnight. The
Authors Association of Bangladesh (Bangladesh Lekhak Samiti) recommended him for Nobel award in literature in
1986-87 in response to the invitation of the Nobel Committee of Swedish Academy.
He wrote a number of books in Bengal and English. At present he is serving as the Principal, Dream Land Preparatory
School and also serving as the Secretary, Publication, Information and Media cell of Swanirvar Bangladesh.
He visited many counties around the world.