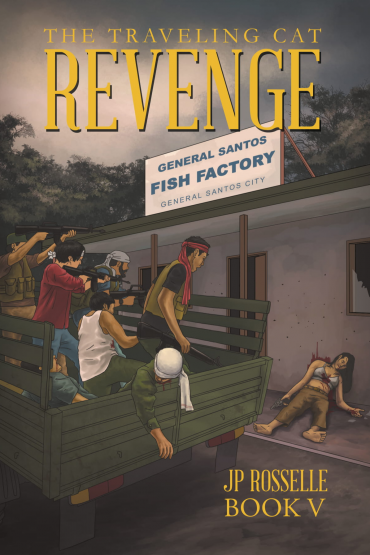 Jim’s adventures leads him to the Philippines, he is there on the invitation of Ferdinand Marcos, President. Marcos’s Philippine Shipping Line is up for sale. Jim’s friend Bob thought Jim the perfect fi t to buy the line. On Jim’s first visit, Marcos assigned a Police Lieutenant to accompany Jim to the Southern most City of General Santos. Jim becomes attached to the young female Lieutenant. Jim is back in Miami when the Lieutenant is brutally killed while fighting off a supposedly Rebel attack.

The Author, JP Rosselle at a very young age was exposed to an adventurous boyhood. He was raised in Miami just several blocks from the entrance to Key Biscayne and the now beautiful Vizcaya Estates. At the time Jim was growing up, Key Biscayne still had an active Seminole Indian Village. The Light House at the end of Key Biscayne had been attacked by the Seminoles in 1835, was still standing in it’s condition of it’s last attack. Vizcaya was this huge abandoned mostly walled property of over 50 acres that indeed was just about as natural as it could have been with the exception that there was three story mansion sitting on it.

The Biscayne Bay’s waters were then Crystal clear and full of fish and crawfish. Jim had what he considered a world much different than most kids. Jim’s father taught Jim to swim, fish, camp, sail and work with his hands. Jim’s father who was born in Key West built their first sailboat when Jim was just 8 years old. The scouting program in which Jim was an active member from ages 8 to 15 and the Coconut Grove Sailing Club added to Jim’s ongoing skills and adventures. Jim’s youth was spent sailing, camping and exploring. School was not Jim’s favorite. Most school hours Jim spent daydreaming and planning his next great adventure. This book will be Jim’s fifth published fictional adventure. Jim has written 4 more books of which he hopes to soon get to his readers. Jim always says, “The possible is done today, the impossible takes longer”. Jim believes, with hard work and the right Attitude, anything is possible.