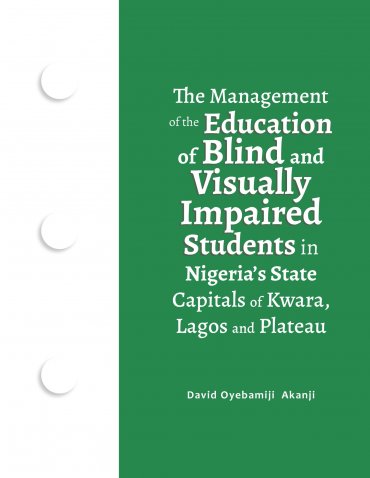 I was born in the village of Bode in the year 1955. I became blind when I was five years of age. I did not start my primary school education until I was 10 years of age. I successfully completed my primary school education in the year 1966. I did not stop there, in 1967, I attended Osodi Vocational Training Center for the Blind. In 1968, I completed my course there as a telephone operator. I was also taught advance braille. In 1969, I attended IWO Catholic Secondary Modern School where I was trained as a typist and completed in 1970. In 1971, I had the opportunity to attend Ibadan Christ Apostolic Grammar School where I did my high school education. In 1975, I graduated from Christ Apostolic Grammar School. In 1981, dean then Oyo State Government give me scholarship to come to United States of America for further studies. I was admitted by dean then Arkansas Enterprises for the Blind and now known as International Lion Services for the Blind. I was there for two semesters. In 1982-1985, I started my degree program at Philander Smith College in Little Rock, Arkansas. I completed my degree in 3 years instead of 4. While I was there, I was a member of WHO is WHO, among universities and colleges. I was also a member of Alpha Cappa Mu, an academic honor society. My academic achievements impressed my academic dean then to the extent that he called our university for them to give my scholarship to do my Master’s in Education. I started my masters in Howard University in January 1986. I successfully my master’s degree in 3 semesters instead of 4. In 1988, I started my PhD program at Gallaudet University located in DC. I successfully completed that in 2008 in Special Education Administration.

The book specifically dealing with the inadequate way of managing the blind education in three state capitals of Kwara, Lagos, and Plateau, states of Nigeria.