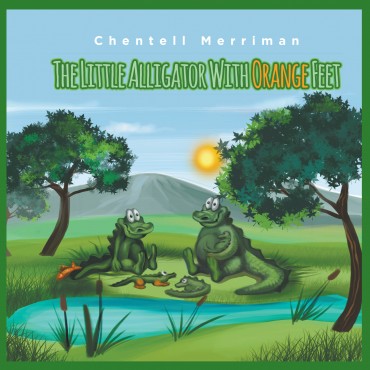 The Little Alligator with Orange Feet is about an alligator name Sabastian. Sabastian got teased by his two siblings because of his orange feet. One day Sabastian got so upset about being made fun of and ran off deep into the murky swamp. It was beginning to get dark and on top of that; Sabastian was lost. A bird name Mr. Robin saw Sabastian and asked him if he were lost. Mr. Robin has a blue beak and he knew how it felt to be teased because you looked different. Mr. Robin took Sabastian under his wings and began telling him how he got pass his blue beak.

As Sabastian and Mr. Robin headed back towards Sabastian’s house, Mr. Robin knew deep down inside Sabastian had learned a valuable lesson that day. Let’s turn the book over to see if Sabastian’s brother and sister learned a lesson that day also. This imaginative story is about being different that others and embracing who you are. It’s perfect for any young reader anytime of the year. Stay tuned and see!

Chentell Merriman is married to Anthony Merriman. They have five loving children and reside in Texas. Three children are in college, and two are still in school.