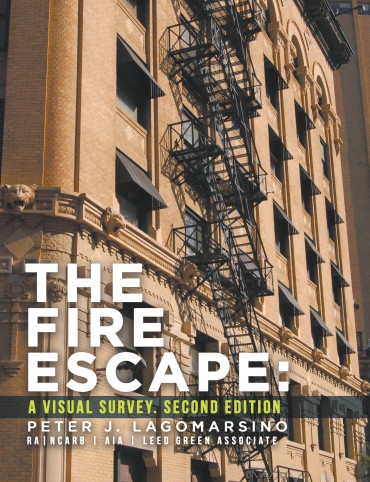 In this second edition of the book, The Fire Escape, A Visual Survey, shows the physical urbanity and human condition of the forms of the cities and its fire escapes from twenty five cities/urban areas in all four corners of America. Specifically, it is a survey of an architectural component which was mostly an afterthought.

The Fire Escape shows the art that was created as a result urban leaders placing more value on their own profit in the creation of buildings, than the lives of the many workers or occupants inside their capitalist machines, leaving legislators to come to the rescue with an external solution. This iconic form is glorified with scenes in movies, but their everyday existence is to hang there as lonely as the wealthy industrialist’s that initially omitted them. They speak of being our savior in an impending doom, and do so in shadows of light and mirrored reflections seen in complex overlapping Cartesian coordinates.

This book shows the beauty of a dying and unique American architecture. The images highlight the fire escape as eerily frozen in time, like they are from a cold war East Berlin, waiting for their removal by a follow on urban renewal that may never come. Their increasing protection due to evolving civic affection for their role in our lives gives them cultural importance. And yet very few architectural forms exhibit this much soliloquy of repetition and rhythm that is so involved with the hieratic form of a life safety function. Function followed form here as expected, but they are ironic and speak of the human condition waiting for us to go down to our eventual end. They hang there like a hovering death eater or a cemetery we pass on the way to work reminding us of the frailty of human life and the inevitable last journey to a final destination that we all must face.

Peter Lagomarsino a Senior Architect that has practiced Architecture for over twenty four years. He’s the author of “Confessions in a Crown Vic” a critique of the American “Dream” and the story of what really happened in development this last century. He is an avid photographer of architecture with over thirty six years been behind the camera. He also paints acrylic on canvas for art sales and commissioned work. He has Bachelors of Arts in Architecture from the University of New Mexico, a Masters of Architecture from Clemson University and is LEED Accredited. Part of his Masters, was at the Charles E. Daniels Center for Urban Design at Clemson’s Villa in Genoa Italy where he traveled extensively in Europe, Greece, and the Middle East capturing over six thousand images on slide medium.