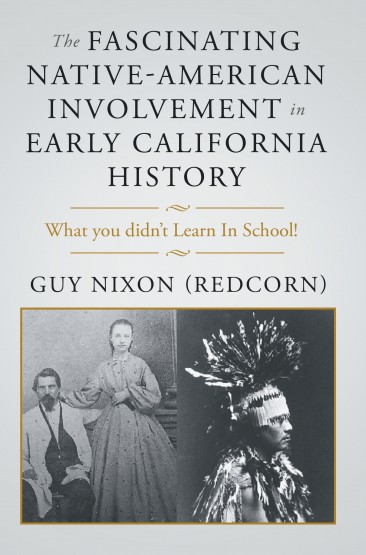 Few people realize just how many Native Americans are in California’s history. For many the Donner Party, Mormon Battalion, Bear Flag Revolt, Charles Fremont, John Sutter, Governor Vallejo and Commodore Stockton are all a big jumble of history. How and why these events took place and the amazing parts that Native Americans played has never even been mentioned in the history you may have had in school. How this all came together, the amazing twists and turns, individuals and groups that made California are presented here in a way you have never even imagined.

Guy Nixon (Redcorn) grew up in Gold Rush country and still lives only one mile from James Marshall’s Blacksmith shop in Kelsey, California. The Kelsey one room school house, where Guy’s father Bill attended school, was taught by Margaret Kelley until Bill entered the second grade. Margaret Kelly had taken care of James Marshall in his old age and had done a remarkable job of preserving early California history. Growing up in the community, with the old stories and original sites surrounding him, Guy Nixon (Redcorn) took a keen interest in this history and has spent more than 40 years researching this fascinating era. Guy Nixon (Redcorn) used his college degree while working for the U.S. Forest Service doing the first Abandoned Mine Survey for the El Dorado National Forest as well as the first survey of the old mule train trails that once supplied these mines. His intimate knowledge of the area and its fascinating history were the motivation for him to begin writing.