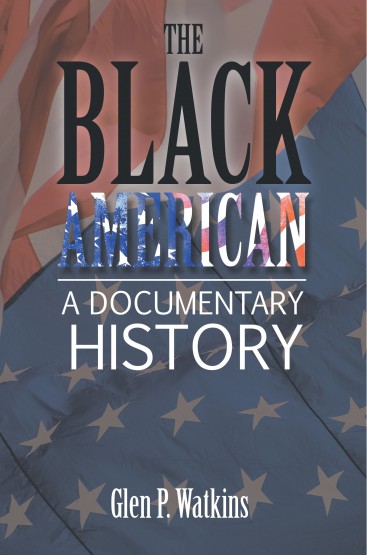 The Black American: A Documentary History by Glen P. Watkins, author. The purpose of this work is to present an overall view of the black race in American culture from slavery until 1992. The long voyage across the Atlantic involved weeks of nightmarish misery, suffering, and death. Slaves were kept in close quarters of ships with little space between the decks. They were manacled except when taken to the top deck for exercise while their quarters were being cleaned with vinegar. This was a journey of horror marked by death from dysentery, small pox, and the yaws. Some slaves committed suicide by the strange African method of swallowing the tongue. Destined to become an integral part of American history, the presence of African Americans markedly shaped the life and history of the 13 colonies. By many measures, the relative position of African Americans has scarcely improved. Undoubtedly, many have made impressive gain, but after more than 40 years, the majority has not sufficiently improved their relative standing. African Americans and other ethnic groups have acquired limited progress in social mobility. This exciting history is a part of all American regardless of ethnicity or social standing and should be known by all Americans. Learn the story in The Black American: A Documentary History.