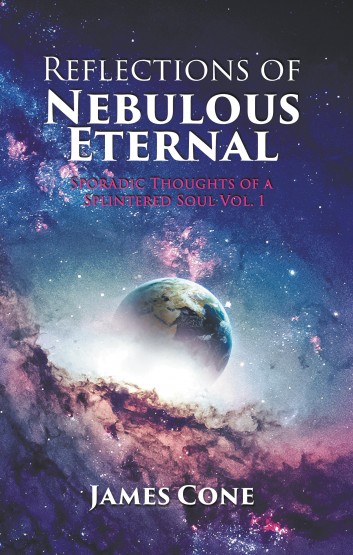 The Reflections of Nebulous Eternal is a selection of poems written by a soul that left the spirit realm and entered Earth to gain a deeper insight to itself and as it evolves and awakens, the spirit tries to relay the information to the rest of humanity. This is a daunting task and many awakened souls band together to push the world into a brighter future. The reason Earth is called Nebulous Eternal is because a Nebulous is a fog/haze and this world is exactly that …. a haze and it last for eternity because too many humans would rather use their knowledge, skill, power, and wealth to feed their greed and massage their egos. Those that are awake aim to counter this behavior; if not for today then for tomorrow’s generation. So, these are the sporadic thoughts of a splintered soul dwelling in Nebulous Eternal on a mission to gather with like minded spirits to educate the children and spread LOVE and Compassion to the world.

Poet James J. Cone is the son of James H. Cone and Myrna Jo Cone. He was born in El Dorado, Arkansas and raised in Jacksonville, Arkansas. He has 2 brother’s Cassius Jackson (Rest in Love, Light, and Serenity), Christopher Cone, and a sister Myrneshia Hampton. He currently resides in Germany with his 3 sons Madison, Neven, and Zailen. He has been writing for over 20 years. Ever since he was a child he has been intrigued by spirituality from various perspectives throughout the world and the interactions of people from various social structures and it shows in his writings. This will be the first release from a collection of poetry that he has been working on in the recent years. His writings focus on the flaws of humanity and how we can better ourselves and the world around us through personal accountability.