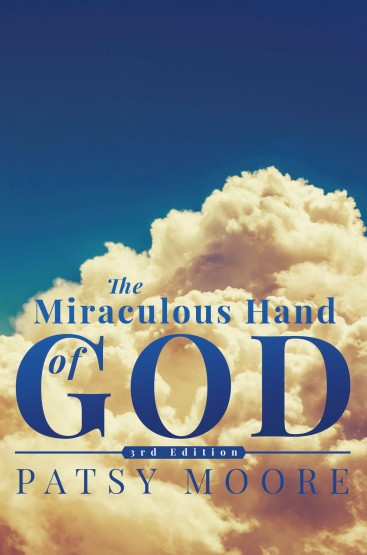 This book is about various miraculous interventions in peoples lives. There are stories from a 2 year old to a 73 year old and several in between as well as in different walks of like. Some are as told to me by others and some are the authors’.
God is still a God of the miraculous. If you don’t think so, I really believe that if you just read this book, you’ll change your mind.
Take a peek inside and let me hear from your and let me know if you believe or not.

Patsy Moore and her husband are the minister’s of God’s Way Ministries in Cuero, Texas and where ever they are invited. She has spoken at churched about her miraculous healing and still preaches about God’s mercy toward her and her family.
Patsy has been a talk show host, radio personality/manager as well as a published song writer and a professional artist as well. Her music is praise and worship. She paints in watercolors, oils, pastels and acrylics and specializes in landscapes, buildings, animals and portraiture. Her paintings have hung in various galleries in Texas.

Patsy has known for a while that she would write a book before she went to be with the
Lord, she just didn’t know what about or when. After being healed and her husbands near death, she realized that it was time, God gave her the title name and so she got started. At first she thought it was about all the miracles in her life until the incident with her husband and as more testimonies came in, she realized that it was God’s work in various ways.