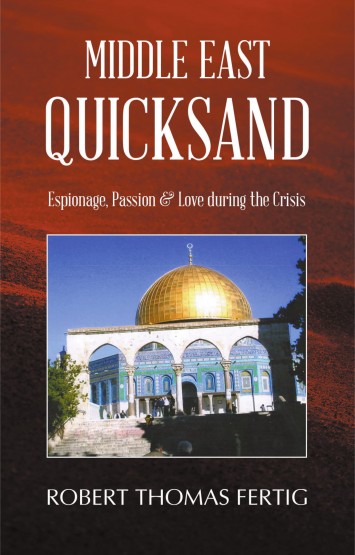 This is a “historical espionage thriller,” that names people, places and events that have happened, and those that are likely to soon come to pass. Some of the key players in this international plot include: Presidents Bush, Obama and Trump; former Secretary of State John Kerry, Hillary Clinton; and key influential leaders of EU, NATO and the Middle East.

Vincent Renaldo was leading a sedate suburban life and mundane corporate job until now. He’s now on a quest for real meaning in life, passion and true love. Vince gets ensnared in the “quicksand” of espionage plots, and love affairs with three women. Which of these women will satisfy his quest: There is Eva, the wild seductress of Monaco. There is Anne, the beautiful double agent, with all the right connections. There is Susan, the devoted loving wife and mother of his children.

Vincent learns the lessons of life when he becomes involved in an international plot between Iran, Syria, Israel and the United States comes together to confront him. He discovers that the real battleground on earth is that one absolute freedom that we all have: choosing between good and evil.

Quicksand is a page-turner you won’t be able to put down!

“This author has certainly done his research. … His ability to keep readers entertained with the [actual] historical facts, as well as romance and corruption, adds to the excitement. The author has done an extraordinary job of describing events, corruption, and seedy characters. Readers will feel as if they were right there. Quicksand is scary, informational and very entertaining.” Carol Hoyer, PhD., for Reader Views.

Robert Thomas Fertig is a veteran of the USAF. At the Columbia University Graduate Physics Lab, he was responsible for setting up experiments. At General Electric, he taught computer programming, nationally. At Sperry Univac, Fertig was a Competitive Analyst. He later became Vice President of Advanced Computer Techniques Corporation. He established Enterprise Information Systems, Inc., an IT Consulting Firm. Robert T. Fertig is the author or co-author of nine books: Quicksand, Guardianship Reality, Culture Battles, Consequences, the Beauty and Wonder of Transcendent Truths, The Software Revolution, Best Interests of the Children, and Engineering Workstations. For five years, he was a volunteer with Guardian ad Litem (CASA), and is currently an Eldercare Guardian, in Pinellas County, Florida.