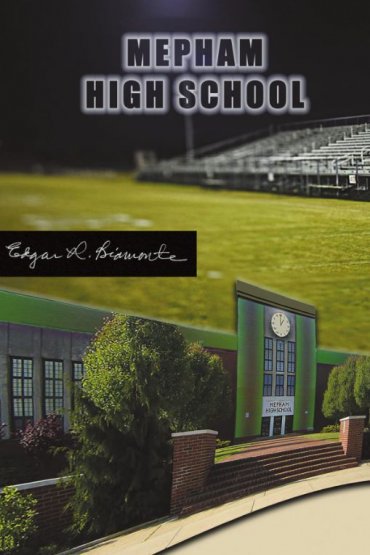 Mepham High School is a highly-detailed, well-written story that occurred during the nineteen forties which takes the reader on a journey in time and culture that captures interest and attention. All incidents and much of the dialogue are accurate. Names are fictitious except for Jack Solomons, Sal D’Angelo’s best friend who edited several of his books.

Though the story includes Mepham losing its one hundred first wrestling match after a hundred consecutive wins, it is about Sal D’Angelo’s high school life. Though an intelligent regent student, he has trouble with school work because of attention deficit disorder and his difficulty adjusting to teen behavior.

Sal also has trouble coping with his dysfunctional parents. An outstanding flutist as a staff musician playing on NBC and CBS, Dad is egotistical, materialistic, and conservative. He is also domineering, unjust and stern. Catering to Dad’s chauvinistic ways, Mom is unhappy. Treated like a slave, because of Dad’s income, she tolerates him, often bragging to musician friends about never washing a dish. Nor does either parent praise Sal or his sister about anything.

Though loving and possessing a good personality, Sal is bashful with girls, especially since most belong to cliques that associate with boys with varsity letters in sports. Nevertheless, naively curious about the world and stunned while listening to news about the casualties during World War II, he eventually develops an iconoclastic way of thinking, yet with a sense of humor. Absentmindedly noting little things around him like leaves on trees, insects, and the ballerinas printed in the wall paper at home suggests that Sal isn’t as maladjusted as he thinks. In fact, he is like most teens his age.

Edgar L. Biamonte is an accomplished musician, educator and writer. As a pianist, he has been professionally performing in restaurants and various occasions since he was 18 years old. He joined the 686th Air Force Band as a beginning pianist in 1950. Before being honorably discharged, he and the band toured Europe with Frank Sinatra, Tony Curtis, Janet Leigh, Rhonda Fleming and Ava Gardner during the Christmas season of 1952.

He received his B.A. in English from Queens College, Flushing, New York in 1961 and his M.S. in Education from Elmira College Graduate School, Elmira, New York in 1968. He taught English, including poetry and creative writing at Southside High School in Elmira from 1962 until he retired in 1985. Over 100 of his 325 poems were published in literary magazines and many won or placed in various contests.

He eventually became an accomplished jazz pianist and composer and soloed on several Carnival Cruise ships and “Mariner of the Seas”, Royal Caribbean Line. He still plays piano professionally and appears on the Internet under edgarbiamonte.com.

Currently, he is a resident of Hemlock Farms since he moved from Miami in 2002. He has three sons, one daughter, two grandchildren and five great-grandchildren.