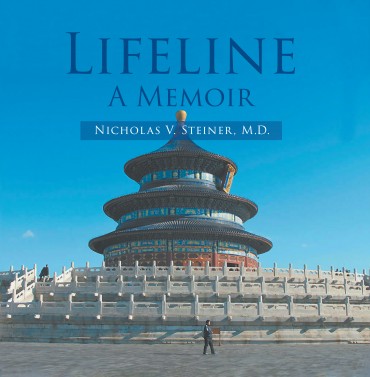 Dr. Nicholas V. Steiner’s career as a practicing internist ends abruptly when he develops metastatic melanoma. A series of local recurrences—including one in the brain—are surgically removed until one day the cancer returns with a predicted survival of three months. Resigned to his fate and with nothing to lose, he turns to an expert in Traditional Chinese Medicine. Within weeks of starting Dr. George Wong’s medicinal herbs—ordered from a small shop in Chinatown—the cancer disappears. Steiner has written about this in a previous memoir: Unforeseen Consequences, a Physician’s Personal Triumph over Advanced Melanoma (Xlibris).

In 2001 he develops prostate cancer and again consults Dr. Wong. Chinese herbs slow the disease’s progression for years, until 2011 when faced with a gradually worsening situation, Wong suggests they fly to Beijing. Once there, the author will undergo a novel form of treatment in a military hospital; his doctor will be a colonel in the Chinese Air Force. Lifeline, a Memoir depicts the unusual situations that the two men often encounter with poignancy, pathos and humor. Written in concise language, the book also contains numerous photographs taken by the author.