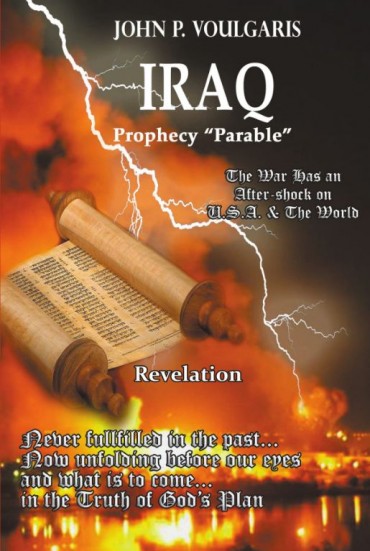 Did the Bible predict the war with Iraq?

Can the Bible foretell events with future calamities?

Correct interpretation reveals God’s End-time messages for us and His 3rd & 4th Predetermination against Babylon’s elite society on the earth.

Iraq: Babylon topical area is a type for global range Babylon. “The Lord of Armies” with a U.S. & U.N. Coalition ousted Saddam Hussein. In similar way His angelic hosts will cast down Satan.

Prophecy: God as “the Holy One” warns – the mighty USA that led the invasion – “their country is full of guilt [found in sin] against the Holy One of Israel. Flee out of the midst of Babylon and save every man his life;” (Jer 51:5-6, Rev 18:4).

Parable: God’s highly intimate Prophecy is in symbolism! Recently a Living Parable, “you will take up this parable against the king of Babylon, and say,” (Isa 14:4) not just in words, in the story of a late tyrant in Iraq the same traits of Satan’s spirit, pride and wickedness were carried in human form!

Revelation: Hidden symbolisms are revealed only to trusted servants “rightly dividing the Word” from the mouth of God in original texts and not by translations. It is vital to know how to walk in the coming urgent times [Gr. ‘kairoi’]. This book settles a huge misinterpretation how translators gave to Satan the name ‘Lucifer (?) that does not exist in the text Isa 14:12; plus, various intriguing issues Bible scholars will be blessed to deem in.

John P. Voulgaris was born in Alevrou, a small village near Sparta Greece in 1935. After his
education in ancient Greek with zeal to studying also Scriptures in Hebrew serves as senior minister
in Apostolic and Messianic churches. In 1984 coming from NYC to New Jersey heard the Lord’s calling in Greek clear words:

“This By-Message of Mine you must fulfill, for I WAS, I AM, and I WILL BE;” for writing spiritual books that reveal Truth. He now lives in New Jersey with his wife Irene, their four children, and six grandchildren.