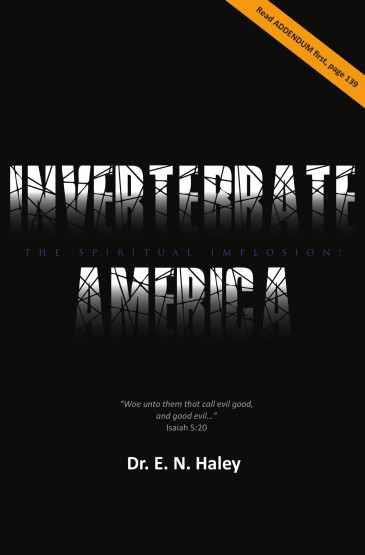 Invertebrate America (IA) gives an overview of America’s declining moral and spiritual values from a biblical perspective. It explains God’s impending judgement on a nation that calls evil good and good evil vis-a-vis: same sex marriage, homosexuality, corporate greed, secret societies surreptitiously influencing business, education and government. It shares how biblical prophecy is being fulfilled right before our very eyes. Read the books of Daniel, Zechariah, Ezekiel, Isaiah, Matthew and Revelation. It sheds some light on the coming one world government and one world religion. In short IA is a wakeup call to those who are searching for the truth and purpose of this world’s existence! Learn why George Washington was leery of a two party dominated political system.

Dr. Haley was born May 22, l954 in Blytheville, Arkansas. He has been a pastor since 2005.
He's married to Sally and they have three children: Tamika, Shannon and Erin. He is a public school teacher. He has a B.A. from Claremont Men's College, (now called Claremont Mckenna College) a M.A. from National University and a doctorate from Sacramento Theological Seminary (Modesto extension campus). His hobbies are writing, acting (member of SAG) and working with youth. His short play, “THE SALVATION GAME”, was published in TeenPower Magazine.