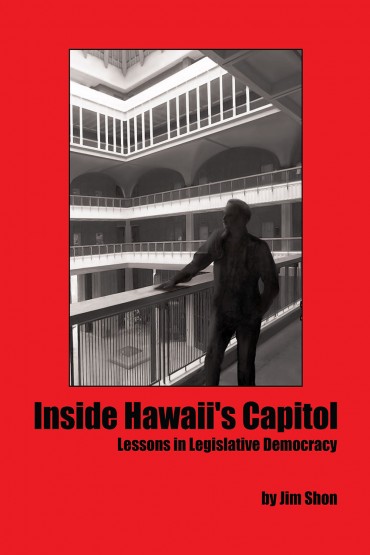 “Jim Shon’s book takes you inside the hopes, aspirations, triumphs, and failures of the legislative process. Having covered the legislature as a reporter, I was left thinking it was both better and worse than I remember it”.

Tom Coffman, author of Catch a Wave and Nation Within

Inside Hawaii’s Capitol tells the tale of Jim Shon’s twelve years as a member of the Hawaii State Legislature. Readers are encouraged to put themselves into the shoes of a legislator and to gain an appreciation for the strengths and weaknesses of today’s representative form of democracy in general, and Hawaii’s recent experience in particular.

Step back from the media hype and sound-bite rhetoric of today’s politics to reflect on both the promises and the frustrations of the Capitol world and to understand how the “system” attempts to deal with complex problems that often seem beyond the modern legislature’s grasp.

Most chapters include a number of lessons and personal conclusions about our democratic process. Readers are invited to ponder these, to agree or disagree, and to better understand how our community elects its representatives and gathers each year to make its laws.

This is not a “dirty laundry” book, nor the lofty memoirs of a powerful politician. It will not please those who take delight in trashing government or elected officials. Shon is a true believer in democracy, warts and all. Inside Hawaii’s Capitol is admittedly the view of only one participant, but it can serve as a citizen’s handbook for those who would appreciate insights into legislative life. It is also a rare insider case study, valuable for citizens and students of American politics.