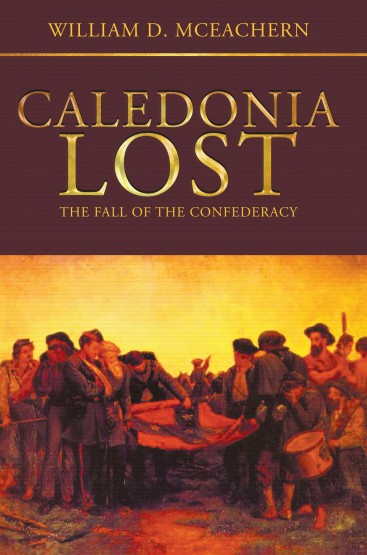 “During the siege of Petersburg at the end of the American Civil War, a Confederate soldier, manning the trenches, reflects on life, love, and the War, while awaiting the climactic battle of the Breakthrough.”

Caledonia Lost: The Fall of the Confederacy tells the epic tale of a young Confederate soldier, James Augustus McEachern, hunkered down in the trenches of the besieged City of Petersburg in the hours before the climactic battle of the Breakthrough, in which the Union Army overruns the Confederate Army, leading to the surrender at Appomattox. James retells, in mental ‘letters’ to his wife, his experiences in the War. His story starts with joining the militia during the heady days after Lincoln’s election and South Carolina’s secession. Next, he recalls the firing upon Ft. Sumter. Joining Wade Hampton’s Legion, he is brigaded with John Bell Hood’s legendary Texans. Seriously wounded at Seven Pines, he still participates in Lee’s first victory at Gaines’ Mill. His exploits include fighting in many of the greatest battles of the Civil War in both the eastern and western theatres of the War, such as Antietam, Second Manassas, and the siege of Chattanooga, and as well as on lesser known fields of honor, such as Wauhatchie and Riddell’s Shop. Uniquely, he serves as infantry and as mounted infantry. His ‘letters’ to his wife reveals the depth of their relationship and the sacrifices each has made for the other. Through the War, he comes to know some of the most famous Generals of the Confederacy, including A. P. Hill, James Longstreet, and Braxton Bragg. Has this prepared him for the greatest charge of the Civil War-the Breakthrough-and its consequences, including watching Richmond burn to the ground?

Caledonia Lost: The Fall of the Confederacy is the result of years of research. This journey has taken the author to the National Archives to find the actual military records of James Augustus McEachern, as well as surveying the battlefields of the Siege of Petersburg and Breakthrough at Pamplin Park, and all the other battles recounted in the novel. Finally, Caledonia Lost: The Fall of the Confederacy employs actual letters written by James to his wife, Victoria, during the War.

William D. McEachern lives in Palm Beach Gardens, Florida, with his wife. He is a father and a grandfather. Mr. McEachern received his B. A. from Duke University, his Juris Doctor Degree from Fordham University School of Law, and his Master’s in Law Degree in Taxation was from New York University School of Law. He practiced trusts, estates, and tax law for 39 years, before becoming a full time historian, writing novels of historical fiction. An avid reader of history, he thoroughly researches and travels extensively to lend authenticity and realism to his works. To write Caledonia Lost: The Fall of the Confederacy, Mr. McEachern visited, among other battlefields, the site of the Breakthrough, preserved in Pamplin Park in Petersburg, Virginia on numerous occasions and consulted with numerous Civil War historians. His areas of expertise include the Roman Empire, Early Christianity, Scotland, and United States History with a particular emphasis on the American Revolution and the Civil War. Mr. McEachern’s first novel, Casting Lots, the life story of the Centurion who presided over the Crucifixion, garnered excellent reviews. His 2nd novel, Caledonia: A Song of Scotland, explored Scottish history up to the Battle of Culloden and the beginning of the Highland Clearances. New Caledonia: A Song of America, the 2nd novel in the Caledonia series, follows the Scots migration from Scotland to America, as they walk the Great Wagon Road and finally settle in North and South Carolina during the era of the French and Indian War and the America Revolution. Caledonia Lost: The Fall of the Confederacy is the story of the experiences of a Scot from South Carolina fighting for the Confederacy in the days just before the end of the Civil War.