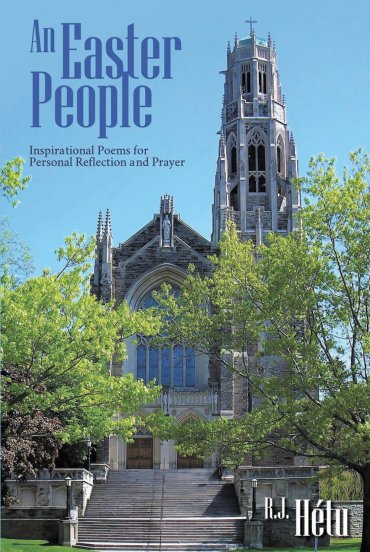 About the Book
Poetry is an evolving art. Twenty-five to thirty of the current poems are modifications of poems from his first poetry book: The Blood Of His Love (2003). This current compilation of poems, entitled: An Easter People is a labour of love. Like his hockey career, which he began in the seminary at the age of 21, he only began writing poetry seriously as a priest in his early 40’s. This compilation of 185 poems covers a multitude of styles and approaches and is a culmination of nearly 20 years of writing. Currently, his focus is on faith base poetry for personal reflection and prayer. The author has been inspired by his prayer life, spiritual reading and the internet. Many of the ideas of his poems are influenced by the Bible and the writings and spiritual life of others. Over the years, by God’s grace, he have come to the realization that poetry is more than rhyming. Poetry is speaking from the heart.

About the Author
R.J. Hétu, better known to many as Père Robert or Father Robert, is pastor of the four Catholic French language parishes in the Niagara Region in Ontario (Welland, St. Catharines, Port Colborne and Niagara Falls). R.J. was born and raised in Hamilton, Ontario. On May 10th, 1986, he was ordained a priest for the Diocese of Hamilton in Canada. Fr. Robert was recently elected Dean of Welland.
He wrote his first poem on retreat in 1998 and second for a radio contest in early 2000. Since winning free concert tickets, he has not stopped writing poetry. Today, he mostly writes faith based poetry.
Fr. Robert is a long-time member of the editorial committee of Your Bread of Life magazine. He recently was appointed assistant editor. He regularly contributes articles and poems to the magazine. He also served as a Catholic School Board trustee for over 17 years. He has been a member of the Knights of Columbus for 40 years.
R.J. also enjoys dabbling in photography, acting in community theatre, tending goal in oldtimers’ hockey and playing tennis. He hopes, one day soon, to learn to read music and to play the piano.