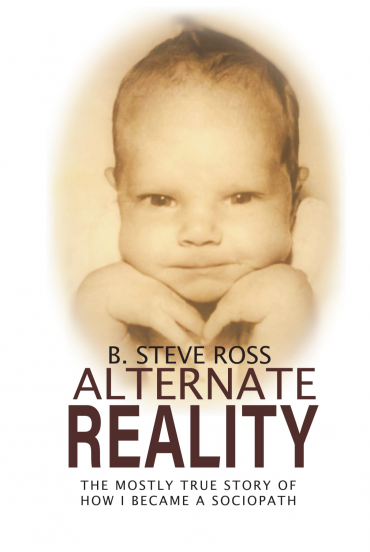 Alternate Reality is the comical telling of the mostly true story of how Steve Ross grew up in a dysfunctional family with dysfunctional relationships and overcame the pitfalls of his youth to live a good and prosperous life. Those who have been in an abusive or bad relationship know the doubts and fears we take into the next relationship as emotional baggage. That baggage has a tendency to negatively affect the new relationship and eventually doom the new relationship adding more doubts and baggage to the next. This culminates in an avalanche of bad relationships with seemingly no end. In Alternate Reality, Ross uncovers the secret to overcoming the avalanche in a comical and down to earth way, sharing wisdom about life, how he ruined every great relationship he had, and how to treat people. Ross is a great story teller with a great story to tell. Join in with his adventure and his mistakes during life.

A Master Electrician living with Sociopathy for over 35 years Steve Ross has cracked the code on how to live as a functioning part of society with this mental disorder and is intent on helping the rest of the world. Steve Ross grew up in a dysfunctional home in the hills of Georgia and joined the US Navy at the age of 19. After more than 8 years of service as a Naval Nuclear Power Plant Electrician, he focused on an electrical career as a Journeyman Electrician and eventually became a Master Electrician. The decision to write his story came after a family reunion where he (for the first time) shared with his family not only that he was a sociopath, but how he became one. Alternate Reality is Steve Ross’ first published book